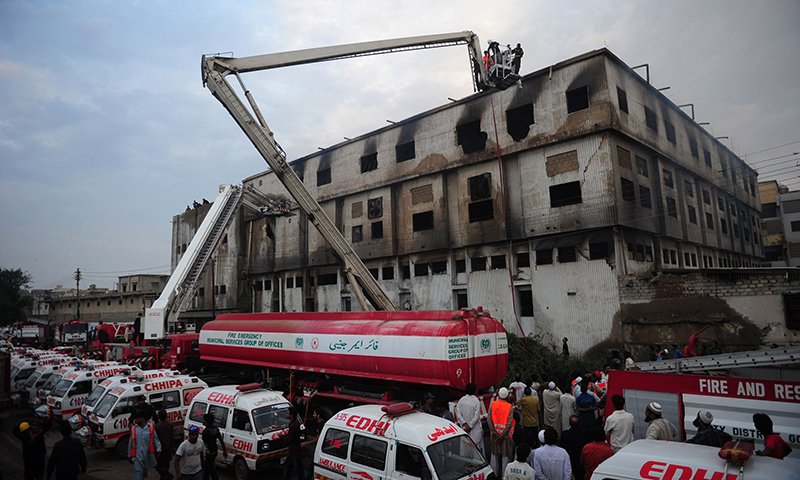 The day of September 11, 2012 witnessed the worst industrial mishap of our history and 260 laborers went martyred in this incident are yet to be doled out justice as the perpetrators of the Baldia factory fire are still scot-free. To avert the dreaded industrial mishaps like Ali Enterprises Karachi fire we have to ensure strict health and safety measures at workplaces, said the speakers  of a big rally organized jointly by the National Trade Union Federation (NTUF) and Association of the Affectees of Baldia Factory Fire here Wednesday in front of the affected factory.

The event was presided over by the chairperson of the Association Saeeda Khatoon, while survivors of the incident and relatives and families of the victims also attended it, besides a large number of workers and social and political activists. Sindh minister for information Saeed Ghani also attended it.

The speakers regretted that even after passage of seven years the real culprits of the incident are away from the long arm of law. They said industrial incidents are routine due to poor health and safety measures in industries, factories and workplaces. The Sindh government in 2017 has approved an Occupational Health and Safety Law, but its practical implementation is still a big question mark.

They said now the government of Punjab has banned labor inspection to prove its anti-worker mentality. Moreover, in many entities of Balochistan, making labor unions is now banned under court orders. They said that these anti-worker steps are being taken in a country that has ratified the ILO Convention 36, which accepts making labor unions as a fundamental right. They said Pakistan is the only country, which has ensured reach of its product to the European market under GSP+ and it had promised that it would uphold the labor and human laws. They said that famed international brands had promised to safeguard the labor laws in textile industry under Global Framework Agreement (GFA), but sadly despite many local and international labor laws, constitutional guarantees and international agreements factories and workplaces are still killing fields for workers.

They said as per ILO every year 2.2 million people die in the world in occupational diseases and incidents, and 270 million other workers sustain injuries. They said that as per a review report of GSP, in Pakistan every 25th worker faces incident during work. They said that governments of different countries under SDGS have already promised that by 2030 all workplaces would be made safer for workers; however, so far the attitude of the government of Pakistan in this regard is irresponsible.

The speaker said the government, and owners of factories instead of learning a lesson from Baldia fire factory incident and securing lives of workers have created atmosphere of fear in industrial entities. Today less than 1perecent of 68million labor force is organized in trade unions in Pakistan. More than 95percent factories are not registered. Only 5 percent labors have appointment letters, while other factories are run on contract labor system. Less than 5percent of workers are registered in EOBI and social security. These facts show that all laws about industrial relations have lost their effectiveness and the departments empowered to enforce these laws have become dysfunctional. The owners of mills and factories are not ready to accept the constitutional rights of workers, as well as, local and international labor laws. The international brands are also involved in this sorry state of affairs and they are not giving their labors their due rights. This situation is creating unrest amongst the worker class and this unrest could result into grave consequences

The speakers demanded that strict and solid steps should be taken to ensure safety of life of workers at workplaces.

Struggling for the workers rights
Contact us: [email protected]